There has been a design movement brewing for the last few years. This article was originally penned for Firedog’s London business, yet clearly a cocked eye and dipped cap cast Woodstock way shows a local parallel in equal measure. Whether in London or Cape Town, it has become very hard to ignore the growth in “craft” design.

I had used the term “craft” then and claimed it was because there was no name for it yet. But fast forward and the name has become ubiquitous. Its signs are everywhere. Visually speaking, it’s a fascination with the movement from coated to uncoated. From smooth white to rough recycled. From full colour to single. The examples featured are from a UK consumer perspective, but you’ll note the similarities everywhere.

The Kraken is the first imported black rum from the Caribbean blended with over 11 secret spices and weighs in at an impressive 94 proof. Named for a sea beast of myth and legend, The Kraken is strong, rich, black and smooth. The illustrations have been created using a scratch board medium by Californian Steven Noble.

The most visible example is in packaging design. Not so much in big business brands like the ones Unilever champion, but rather in the brands we all like to call “artisan.”

A good example of this movement in play is with our client, Twinings, and a competitor of theirs, teapigs. We produced a digital sales app for Twinings recently, and I recall some musings around the teapigs product in early discussions. The subject was around retail strategy; something that I would never profess to master. What I did clearly recall was the topic around teapigs selling their boxes of tea at £4.15 a unit (with only 15 bags). Yes, it’s loose leaf tea, and it’s probably not bad. But I cast my eye to the packaging of both and was struck by the print processes involved. 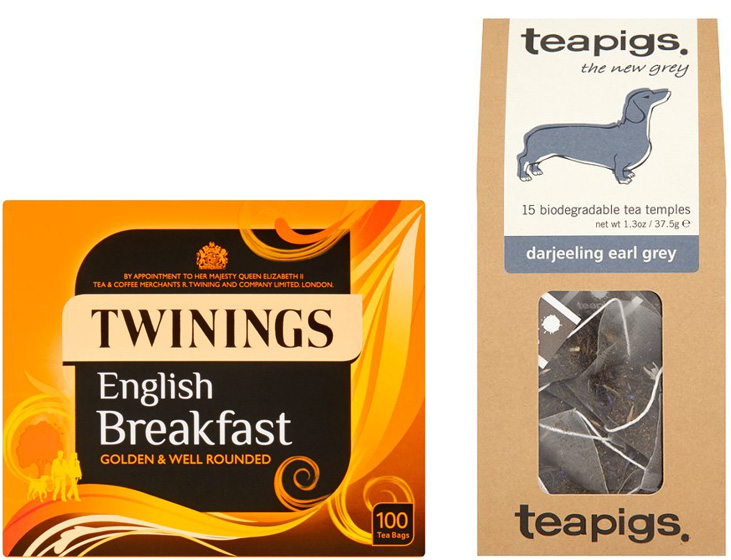 Twinings English Breakfast, good value with 50 bags at £2.80 – contained perceivably more luxurious techniques. There is foil blocking, four colour print and a Royal Warrant to top it off. The typography is carefully rendered. The background is covered in detailed illustration. Looking at the teapigs brand identity, you couldn’t sail more in the opposite direction. Imperfect type mark (with the E.E.Cummings-like lower case initial T), mis-registered screen printed illustrations and a basic brown craft board as the package itself. Being a brand designer by trade, I know this is not by chance. In fact, everything is rather considered.

This got me thinking back to the strategy, and ultimately where the consumer’s mind is placed. Teapigs have faith that the consumer is looking for something less shiny. Their growth as a brand is a clear indication of their intuition on shoppers’ habits. What’s even more fascinating is that teapigs is a subsidiary of Tetley, which in turn is owned by Indian large business brand Tata. So its artisan image is really just a sham.

The Twinings / teapigs example is just the start. Look at any of the premium / artisan products in your local store and you will quickly establish that the design aesthetic moves from the perfect to the imperfect – and at a price premium to boot.

Look at any of the premium / artisan products in your local store and you will quickly establish that the design aesthetic moves from the perfect to the imperfect – and at a price premium to boot.

Drinking rum has never been a habit of the hoi-polloi. Even so, it has received the same treatment. My favourite artisan example in this category is “The Kraken” spiced rum. It features just one colour, with a deliberate homage to Victorian etching and associated nautical themes. Sailor Jerry follows the same kind of vibe, basing its identity on a prominent American tattoo artist, famous for his tattooing of sailors during the Twentieth century wars. Not traditionally associated with “classy” at all. Both of these rums could be considered premium, with the Kraken retailing for at least 30% more than similar competitors. Competitor Captain Morgan retails for £10 less a bottle, and features four colour print, foil blocking and embossing.

All of these examples show that the consumer is willing to pay more for a product that projects a less well-made image. This clearly breaks the rules that we have been taught as designers and creatives; that perfectly machined type and formal design is an indication of class.

So what does that say about the current human condition? Reality TV aside, I don’t quite think we are losing our refined tastes. Quite the opposite, in fact. I think it’s about the search for Authenticity.

Norman Keith Collins (January 14, 1911 – June 12, 1973) - was a prominent American tattoo artist, famous for his tattooing of sailors. Now a global brand, with very little connection to its nomenclature.

In reality, public perception of Starbucks is that of a bunch of suited criminals, barely above prohibition-era mobsters

Life imitates art. And in turn, art imitates life. The population has grown (even more) distrustful of politics and big business. Tesco’s poor fortunes of late are a clear signal of the UK zeitgeist. People have woken up to the fact that the Tesco brand represents a lack of authenticity. Tesco’s modern nemesis, Lidl, goes on to state in recent advertising “From now on, our advertising will feature the authentic, unvarnished voices of our customers. After all, they’re the ones who know us best.” Ouch.

It has become laughable that, because companies like Tesco have failed so dismally in their own brand image, they have been silently diversifying by acquiring more authentic, smaller brands. For example, Tesco now owns 49% of artisan coffee shop Harris+Hoole. It’s interesting to note that when consumers find out that they have been duped in this way, they feel really cheated. A tweet from a consumer states : “Appalled to discover seemingly independent #Harris+Hoole coffee shop @N8CrouchEnd 49% owned by #Tesco. Never go again.”

Another customer states on the Guardian: “It’s disingenuous. It makes me upset. I feel duped. If it had been called Tesco Coffee, I wouldn’t have come in.”

Life imitates art. And in turn, art imitates life. The population has grown (even more) distrustful of politics and big business.

On the subject of coffee, just look at the public outcry around Starbucks’ reticence to their UK tax obligations. Here is a global brand built on the visual of a hippy-like mermaid girl. In reality, public perception of Starbucks is that of a bunch of suited criminals, barely above prohibition-era mobsters. Is it surprising that consumers have lost empathy with glossy brands?

So where does that leave businesses looking to engage with consumers on an authentic level? Look, it’s complicated. And very little of it actually has to do with old fashioned branding. Branding can often be the veneers on a set of rotten teeth. If your heart is not in the right place, a new haircut is unlikely to make people like you.

Go back to your boardrooms and look at your business. Perhaps think about your operations and consider where your nice margins equal lying to your customers. Do you have meaningful values? Do you have purpose? Do you believe in yourself?